By continuing to use the site, you agree to the use of cookies

Halls
of the Museum

The Kirov Plant Museum is one of the largest industrial museums in Russia.

WITH MORE THAN 12,000 UNIQUE EXHIBITS, THE MUSEUM IS LOCATED IN THE I. I. GAZA PALACE OF CULTURE AND TECHNOLOGY. THE EXHIBITS PRESENT THE 220-YEAR HISTORY OF THE KIROV PLANT IN SIX ROOMS SPANNING MORE THAN 600 M2. 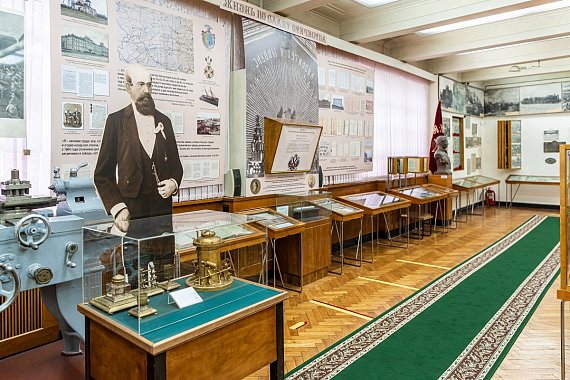 In the first hall, visitors are greeted by artifacts bearing witness to the enterprise’s early days: documents, photographs, models of machinery, coins, and objects related to significant events in Russian history from 1801 to 1940. The numerous exhibits in this room could hold visitors’ interest for hours. From a historical perspective, the most valuable are the cast-iron cannonballs – the plant’s first products – and rails produced at the Putilov plant in 1872. The artifacts from 1868 to 1880 are also of great interest. At that time, the plant was owned by talented Russian engineer and entrepreneur Nikolai Ivanovich Putilov, under whom it reached new heights. The museum’s first exhibition hall opened in 1962.

The Kirov Plant during the Second World War

A separate exhibition hall is given over to the work of the Kirov Plant during the Second World War. Visitors will see exhibits related to the history of the enterprise during this period, and learn all there is to know about the models of equipment manufactured by the plant and the events of the post-war period. As the front moved closer to Leningrad, most of the Kirov Plant’s equipment and employees were evacuated to the Urals, where a huge tank-building complex was created: the famous Tankograd. The second hall presents models of KV and IS-2 tanks, self-propelled artillery for mounting on the KV tank, and other types of equipment. Exhibits about the Siege of Leningrad have been allotted a separate space. The workers who stayed in the city continued working, repairing tanks and manufacturing ammunition. The Kirov Plant was known as the “front plant” during the siege. A diorama of Prospekt Stachek and the plant buildings give visitors a vivid sense of what the city looked like then. The museum’s second exhibition hall opened in 1962.

The Kirov Plant in the post-war period

For the Kirov Plant, this period was a time of recovery and intensive work to create new types of technology relevant to a country recovering from a post-war crisis. In the third hall, models of equipment are presented alongside the detailed stories of the people behind it. There is also a model of the unique Penguin all-terrain vehicle, the conqueror of Antarctica. The scale models of the main turbine generator for the world's first nuclear icebreaker, Lenin, and the main TS-2 turbo-gear unit for the Sofia tanker (Warsaw series) are particularly impressive. The hall dedicated to the post-war period of the company's history was opened in 1964.

The Soviet period: the exhibition continues

The fourth exhibition hall houses exhibits dedicated to the Kirov Plant during the Soviet period. Here, visitors to the museum will find documents and models of equipment created from the 1960s to the early 1990s (metalwork, tractors, tanks, and turbines). The history of the post-war Soviet tractor industry can be traced through various models of domestic tractor, from the KT-12 skidder to the famous Kirovets, produced in 1962. Many of the exhibits in this hall detail the creation of the legendary Kirovets tractor. The cabinet dedicated to the memory of Petr Semenenko, the General Director of the plant from 1987 to 2005, is of particular interest. This exhibition hall opened in 1972, and was completely refurbished in 2006.

The fifth hall in the museum is both a historical meeting room and an exhibition hall. Its walls display historical documents and photographs that tell the story of the plant’s international relations. Meetings between former plant workers and schoolchildren and students take place here, along with various other events. Themed tours of the museum and film screenings are also put on for students. The historical meeting room has been receiving visitors since 1972.

The Kirov Plant as a joint stock company

The museum’s final hall provides a window onto the modern-day Kirovsky Zavod group, its most recent history, and future prospects. The exhibits presented here are dedicated to how Kirovsky Zavod Open Joint Stock Company, which was formed in 1992, was created and the work it does today. Visitors are invited to view samples of new equipment and to learn about the company today and its plans for the near future. The exhibition in this hall continues to grow and change

History of the museum

The idea for the museum was conceived in the 1920s. Ivan Ivanovich Gaza, the organizer of the Party Committee at the Red Putilovite plant, was the first person to highlight the need to collect and organize the plant’s historical artifacts. At that time, documents, photographs, souvenirs, and various other historical objects had already begun to accumulate. The plant director put aside a special room in which to store these items. At this time, evening gatherings were already being held with former employees, at which participants’ speeches and eyewitness accounts of events during the Russian Revolution were transcribed, and the history of the plant was recorded for posterity.

History of
the museum

A group of authors was selected to write a book about the history of the plant, including an employee at a major newspaper, B. D. Glebov, factory worker and scribe M. I. Mitelman, and writer A. G. Ulyansky. Their five years of work on the manuscript ended with the publication in 1939 of the first volume of the book The History of the Putilov Plant. Unfortunately, efforts to collect historical artifacts came to a halt during the Second World War. Ulyansky passed away in 1935, followed by Glebov and Mitelman.

A new group of authors was formed after the war, consisting of S. A. Kostyuchenko, I. Ye. Khrenov and Yu. N. Fedorov, who began work on the second volume, The History of the Kirov Plant, dedicated to the Soviet period of the enterprise’s history up to 1945. The authors did a colossal amount of work in Russia’s state archives, and found many original documents. As a result of this painstaking labor, a huge amount of historical material was collected, which formed the basis for the museum’s exhibits.

The idea of creating a museum had already been mooted. In 1957, a group of former Kirov Plant employees raised the issue of the need to found a museum in the pages of the Kirovets newspaper.

On July 20, 1960, the plant’s director, Ivan Isaev, issued an order for a museum about the Kirov Plant’s history to be opened on a voluntary basis. The organizing committee was headed by Nikolai Skvortsov, who had worked at the plant since 1929. He became the museum’s first director and managed it from 1962 to 1977. Under his leadership, all the museum’s exhibits were brought together and laid out with help from professional historians and museum specialists.

On November 3, 1962, the first two halls were inaugurated. The museum’s collection continued to expand, and it soon outgrew its previous status as a public, specialized museum. Today, the Kirov Plant Museum of History and Technology is classified as a diversified and multifunctional institution, with educational, instructive, informative, archival, defense, consulting, and advertising functions.

In 1984, the museum was awarded the honorary title of People’s Museum. While it has received many awards and titles, the museum is not merely a snapshot of the plant’s historical achievements, but an active participant in the cultural world of today. Since 2017, the Kirov Plant Museum of History and Technology has regularly participated in the international Long Night of Museums event with special interactive programs for visitors.

Not just a place for exhibitions, the museum is also an educational center for Kirovsky Zavod employees.

Thank you for contacting us.
We will be in touch with you shortly.

Thank you!
You are subscribed to the latest newsletter.